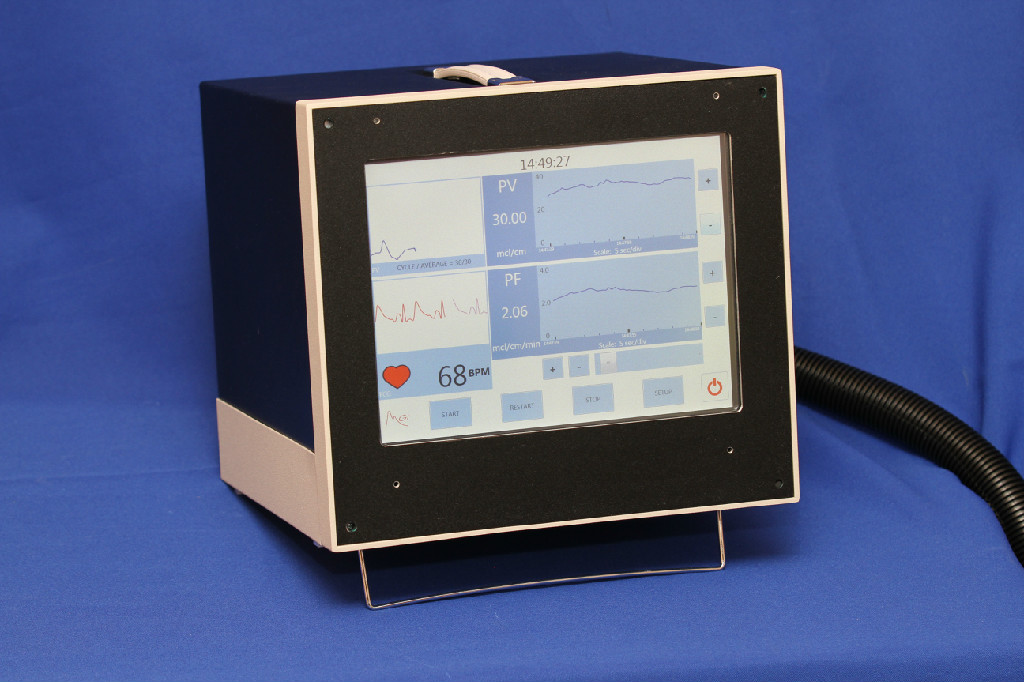 Completely noninvasive, the MGI Medical Pulse Flowmeter uses a patented electrode to obtain pulse flow information by means of a measurement of the electrical properties (impedance) of the extremity. The electrode is easy to apply and comfortable to wear. This information is passed to advanced hardware and signal processing software to compute the blood flow in the extremity. The Pulse Flowmeter is contained within a compact, portable enclosure and presents no risk or discomfort to the patient.

Demonstration of The Pulse Flowmeter's Response to simulated hemorrhagic shock

Here is a screenshot demonstrating the intuitive, user-friendly interface of the Pulse Flowmeter. (This is from a prior version of the device.)

It illustrates the trend in pulse flow that occurs in response to a Valsalva maneuver, which is a breath-holding maneuver, which temporarily decreases the cardiac output.

The screenshot shows when the Valsalva was started. The top graph shows the pulse volume curve at this moment in time.

The other 4 graphs are user-selectable trend lines which, in this example, last for 2 minutes. The initiation of the Valsalva is indicated by the vertical, dashed, yellow line. The first and third trend lines are respectively PV (pulse volume) and PF (pulse flow). Note the dramatic decrease in peripheral flow (about 50%) in response to the Valsalva followed by a period of reactive hyperemia (increased flow greater than the baseline) before finally returning to baseline. The second trend line demonstrates a lagging modest increase in heart rate (HR) in response to the Valsalva. The fourth line (Ro) is the baseline impedance of the limb which is not affected by the Valsalva.

Click here to see a video of Pulse Flowmeter Measurements being made during a Valsalva maneuver. 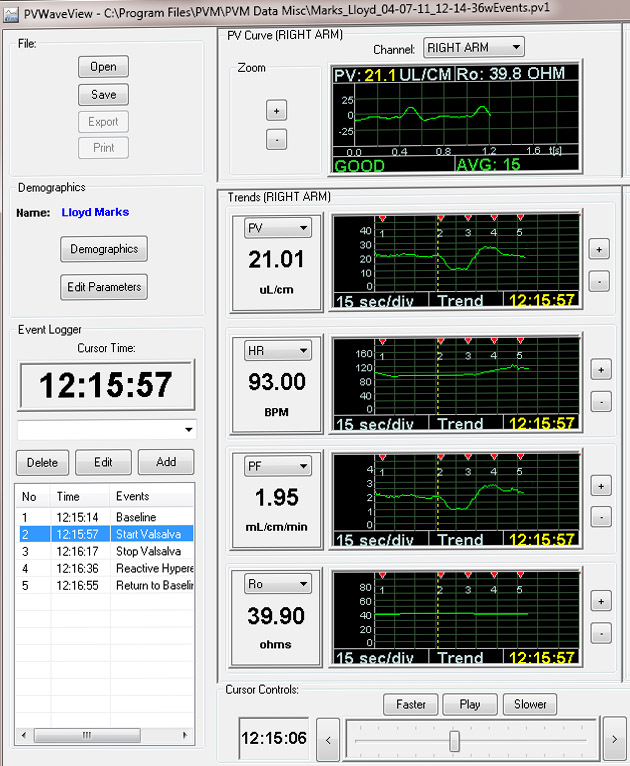 A study performed on 33 blood donors shows that pulse flow drops significantly and substantially after the loss of one unit of blood when there has been no change in blood pressure. This suggests that the Pulse Flowmeter may be useful in the early detection of blood loss during surgery and in the perioperative period. (There is no data yet on patients undergoing hemodynamically significant blood loss in surgery).

DETECTION AND TREATMENT OF BLOOD LOSS

The Pulse Flowmeter is sensitive to changes in peripheral vascular flow secondary to blood loss before other vital signs, such as blood pressure or pulse oximetry change. Thus, pulse flow measurements may be very useful when blood loss is occult or quantification of visible blood loss is difficult or impossible.

The Pulse Flowmeter is a platform technology which may be used for other medical applications, including, management of syncope (fainting), peripheral vascular disease, diabetic peripheral arterial disease, and outpatient management of heart failure.

After surgery, there is often occult blood loss. Patients may be monitored with the Pulse Flowmeter to determine if there are significant decreases in peripheral blood flow, which may indicate such occult hemorrhage has taken place and the patient has entered a state of compensated shock in which the blood volume has severely decreased but the blood pressure and heart rate remain normal.

When trauma patients are first seen by medical personnel, they may have already suffered significant blood loss. An ultrasound scan is usually performed to identify abdominal, pleural, and pericardial bleeding. Blood and/or other are usually administered. Unfortunately, blood replacement and other fluids are often given in excess leading to shock lung. The Pulse Flowmeter might be able to guide physicians as to when it is acceptable to stop giving volume.

As all emergency physicians know, it is difficult to triage GI bleeders and to determine if it is safe to send home or if they should be admitted to the hospital.  As a result, 80% of upper GI bleeders never have an intervention such as a blood transfusion or endoscopy.  The Pulse Flowmeter can help the emergency room physician determine if there is ongoing bleeding with accompanying blood volume loss to help make that decision.  Similarly after a patient has been admitted it can help the gastroenterologist make decisions regarding patient management such as when it is safe to send them home.

Soldiers having sustained serious internal injuries accompanied by bleeding will have markedly reduced pulse flow before the onset of shock. The U.S. Army’s Combat Causality Care Center has indicated that a miniaturized and simplified version of the Pulse Flowmeter would be of value to them for assessment of such battlefield injuries.

Because the Pulse Flowmeter provides information about peripheral blood flow, it suggests that the measurement may be also useful for the management of shock and other medical conditions including vascular instability of the infant in the neonatal ICU, intra-aortic blood pump use, congestive heart failure, use of vasoactive medications, syncope, dehydration, deep vein thrombosis, thermal injuries, renal dialysis, assessing the integrity of the palmar arch before performing radial artery harvesting or radial artery cardiac catheterization, and surrogate for cardiac output monitoring and hypertension.

VIDEO DEMONSTRATION OF PULSE FLOWMETER ELECTRODE BEING PLACED ON FOREARM

VIDEO DEMONSTRATION OF PULSE FLOWMETER MEASUREMENTS DURING A VALSALVA MANEUVER

BASIC INFORMATION ABOUT THE DEVICE

Basic Principles of the Pulse Flowmeter

SUMMARY OF RESEARCH AND CLINICAL STUDIES TO DATE

Key findings that define our current knowledge of pulse volume and flow include:

Baseline and Orthostatic Measurements in Normals